Celebrating Her Majesty The Queen's Reign in

Southern Sinfonia, the professional Chamber Orchestra resident at Queens College, is thrilled to be back on the concert platform for a Platinum Jubilee concert to honour our wonderful Queen.

In celebration of Her Majesty's long reign of dedication and service to the United Kingdom, the orchestra will play music by famous British composers, including Elgar, Walton, Delius, Arnold and others.

Richard Smith, the Leader of the Orchestra, will be the solo violinist in a star performance of Vaughan Williams'  'The Lark Ascending', (voted the country's most popular classical work) and there will be music from the Coronation ceremony, Fantasia on Greensleeves and Banks of Green Willow.

Walton's film music from Henry V and Delius's  'On hearing the first cuckoo in spring' will feature too and there may even be a few 'Prom' style musical surprises!

So, please join us for a magical and joyful evening of great music performed by one of the South of England's finest orchestras'. 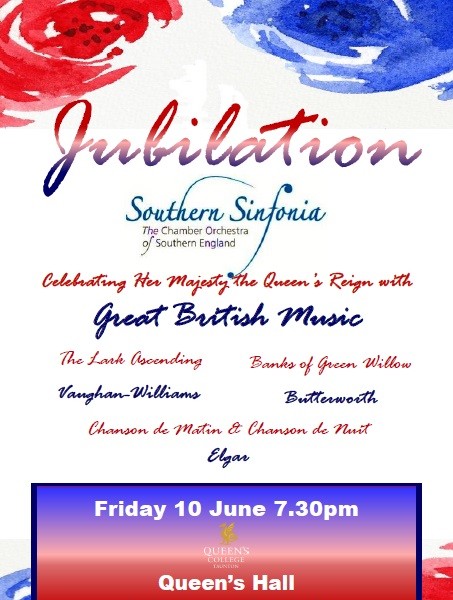